The main mission of the Filmoteca de Catalunya is the recovery, conservation, research and dissemination of films and audiovisual works and materials, documents, equipment and any other element of interest to the study of cinema and audiovisual art in general and Catalan cinema in particular. In essence, the conservation and dissemination of film culture. A description is given of the areas that contribute to achieving this objective and a reflection on the need to offer the public, institutions and businesses with interests in the film industry a reliable professional service.

In July 2011, at the Cubitt Gallery, London artist Ruth Beale presented a series of events exploring relationships between the social purpose and cultural significance of the library and archive as public spaces for the collection, preservation and distribution of knowledge. Lindgren & Langlois: The Archive Paradox is a dramatized exchange of letters between two film archivists who influenced film library policy the world over from 1948 onwards. One, Ernest Lindgren (1910‒1973), director of the British Film Institute for forty years: his institution compiled films selectively while maintaining a strict policy of not screening original films and additionally developed conservation and cataloguing techniques that have become international standards. The other, Henri Langlois (1914‒1977), cinephile and cofounder of the Cinémathèque Française, collected, saved, and screened as widely as possible all the films he could. We owe the anecdote to a scholarly article by García-Casado and Alberich-Pascual (2014), which bears witness to and summarises two opposing ways of understanding the film library phenomenon, combined by the authors in the dichotomy archive versus exhibition, that is, the conservation of film heritage and everything related to the world of film, versus the pedagogical dissemination of filmmaking to all audiences.

Just one year before Beale's performance, in Catalonia the Catalan Cinema Act was passed, consolidating through regulations a sector that, following the transfer of authority planned in 1980, had been only partially regulated. In both the preamble and its articles, the Act recognises the authority of the Filmoteca de Catalunya in matters of 'the preservation and dissemination in film heritage and culture; the recovery, preservation, cataloguing and restoration of film and documentary heritage; and support for the dissemination of film culture, paying special attention to Catalan film production and culture'. The Catalan Parliament integrated in the philosophy of the Act the two schools of thought represented by Lindgren and Langlois: preservation and dissemination, in accordance with the hybridising tendency of the film libraries of neighbouring countries, while including, de jure, that which had been carried out at the Filmoteca de Catalunya from 1981 onwards, the date on which it was officially created, heir to the Barcelona branch of the Spanish Film Archive as of the mid-sixties.

In 2012, the Filmoteca de Catalunya received a final boost when, in an ambitious project, it was moved from its old site to two new centres: the building in El Raval, which contains offices and repositories with areas open to the public (screening rooms, exhibition rooms, specialised library); and the Conservation and Restoration Centre (2CR), in the Catalonia Audiovisual Park, in Terrassa, designed and built to guarantee the conservation of film heritage, both analogue and digital. 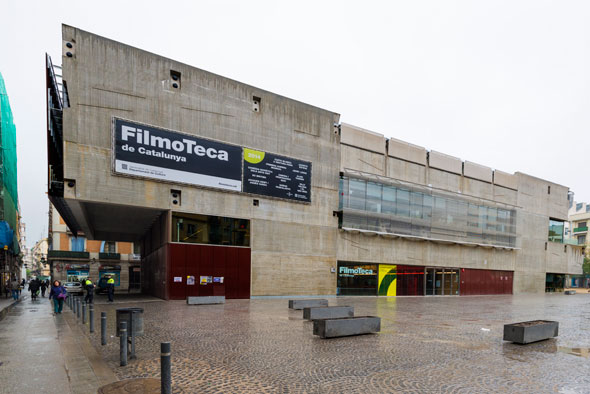 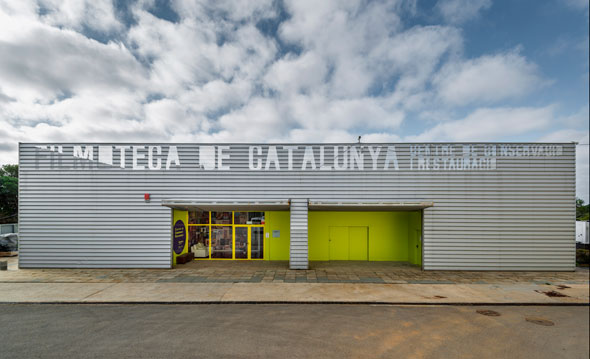 Organically dependent on the Catalan Institute for the Cultural Companies, under the Catalan Ministry of Culture, the Filmoteca de Catalunya has been directed by Esteve Riambau since 2010. It is structured into four areas (Administration; Dissemination; Documentation; 2CR), and has a staff of forty-three. In regard to its impact, 176,660 people have enjoyed the institutions' service in person, attending film screenings (1,109 films in 1,423 sessions) or, to a lesser degree, by using the specialised library (14,098 consultations by researchers), the educational services (8,900 people) and the two programmed exhibitions (1,656 visitors). It has large film holdings (28,415 titles) and documentary holding (some 550,000 copies). The Filmoteca is a full member of the FIAF (International Federation of Film Archives) and as such organised its 69th international congress. Present in the social media, the Filmoteca website receives 520,344 visits a year and has 27,800 followers on its corporate Facebook page and 12,400 on its Twitter profile.

With this background and as established by law, the Filmoteca de Catalunya's main mission is the recovery, conservation, research and dissemination of films and audiovisual works, as well as materials, documents, equipment and any other element of interest in the study of cinema and audiovisual art in general, and Catalan cinema in particular. In essence: the conservation and dissemination of film culture.

In this article, and for the interest of readers of BID: textos universitaris de biblioteconomia i documentació, we will focus on the task and services of the two units responsible for presentation and dissemination of the film and documentary holdings: the Conservation and Restoration Centre (2CR), and the Documentation Unit, which includes the Film Library.

2 The Conservation and Restoration Centre

The Conservation and Restoration Centre (2CR) has as its mission the conservation of film heritage. It is a reference for this type of service in Catalonia and aims to become the same internationally.

It strategy includes the following objectives:

The 2CR pays attention to the conservation of the photochemical and digital films. In regard to the former, the centre has designated areas for their reception, inspection, viewing and treatment, for both negatives and positives, and chambers with temperature, humidity and air renewal control, adapted to the needs of plastic media, whether cellulose acetate, polyester or cellulose nitrate. For the first time, Catalonia has an institution capable of preventing the loss of film heritage entailed in any technological change —in the change from silent to talkies, 80 % of pre-1930 world production was lost; in Catalonia the figure reached 90%. 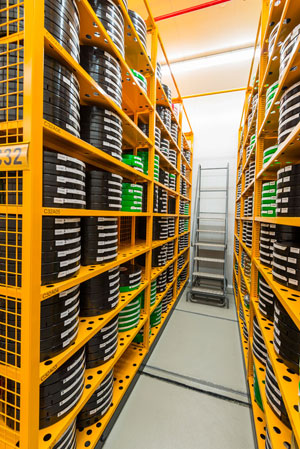 In the case of digital media (HDcam, hard discs, DCPs), the challenge is met in terms of conservation, but also restoration and dissemination, as digital technology offers magnificent new tools in this field. The digital conservation system consists of a reliable repository, in which data is ingested and migrated from original media (native digital cinema, generally) with an anticipated annual growth of 100 TB. The system is designed so that the contents deposited on the digital platform may be consulted remotely. The Filmoteca de Catalunya pioneered high-quality digital restoration (4K) in 2005 and today has a cinematographic scanner (Northlight) capable of working with resolutions of up to 6K (6,144 x 3,160 pixels per frame), considered very high. To further conservation, the collection is disseminated on high-resolution digital copies —DCP— of Catalan films and editions on DVD.

Finally, access to digitalised copies of the 2CR film collections is via the visitor service at the Filmoteca, where users may query the records management system, or be attended personally in answer to a request for information. The viewing and selection of materials is also undertaken at Filmoteca facilities made available to researchers and professionals.

The Documentation Unit, which includes the Film Library, has the mission of supporting the Filmoteca de Catalunya in its aim of being the benchmark centre for the preservation and dissemination of film culture.

These are complemented by these instrumental objectives:

The holdings and collection comprise some 550,000 items, including: 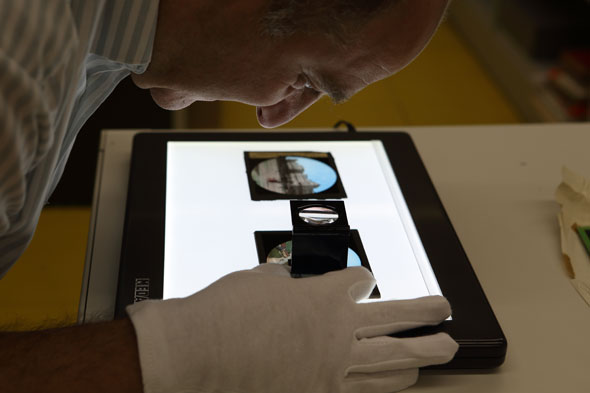 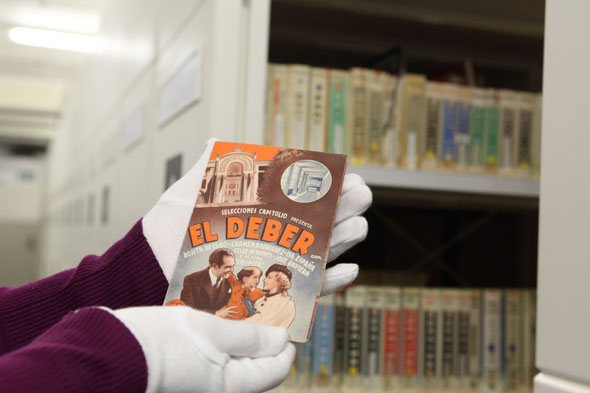 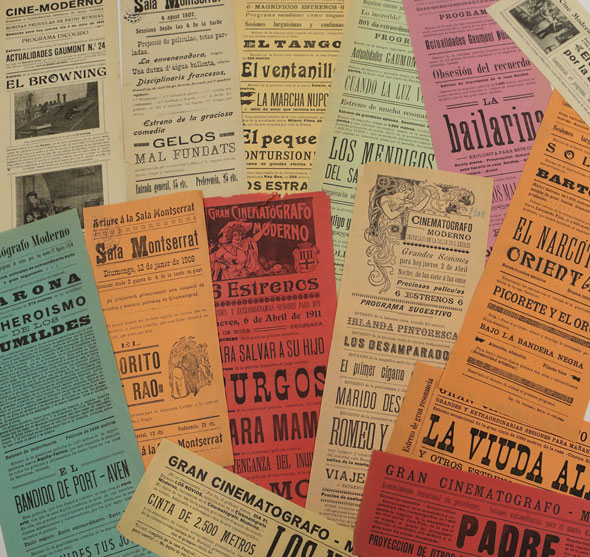 As a member of the Government of Catalonia Specialised Libraries (BEG) network, the Filmoteca's film catalogue –created through the merger of three libraries specialised in cinema (Rueda, 2010)―, can be accessed remotely, and as of July 2014 it is part of the University Union Catalogue of Catalonia (CCUC). The institution's digital repository, developed by the Catalan University Services Consortium, provides access to 17,000 items, including a selection of graphic holdings, and has been incorporated in the portals Digital Memory of Catalonia (MDC), Hispana and Europeana, and the cooperative site ARCA (Old Catalan Serials Archive), by contributing Catalan cinema magazines in the public domain. Furthermore, the Transcriu-me! programme, developed by the Library of Catalonia, recently incorporated a collection of a thousand film posters from the Filmoteca that were able to be transcribed thanks to crowdsourcing, that is, public participation via the Internet.

The Documentation Unit focuses its efforts on the dissemination of and research on film culture by means of a permanent exhibition of part of the pre-cinema collection, a reading room providing direct access to the book and journal/magazine collection, along with booths for researchers, audiovisual viewing areas and access to cinema databases (FIAF, AFI, FII). In regard to the conservation repositories, two small cold rooms maintain graphic documentation, heritage archives, negatives and special collections in optimum conditions.

Since they were created, the various services of the Filmoteca de Catalunya have made every effort to guarantee the preservation and dissemination of film and documentary holdings concerning Catalan culture and audiovisual film. The move to the new centres, in 2012, meant facilities better equipped for these purposes, while the staff have authority to offer services that are more focused on professionals, researchers and the general public, in a society that has spent the last twenty years supporting an area of the economy, audiovisual production, that is considered strategic to Catalan culture and industry.

Three challenges emerge to contribute to the responsibility bestowed on the Filmoteca de Catalunya by current legislation.

First of all, the need to act as an observatory and benchmark of film heritage conservation, in the film and audiovisual industry's transition from analogue to digital. As highlighted during the 69th FIAF Congress, which, as it turns out, was held in Barcelona, the days of motion picture film as a standard of distribution are numbered. For major US studios it will be replaced by the DCP (Digital Cinema Package) in 2015. The film industry, including the Catalan industry, has adopted the new medium, but there is agreement, in this new chapter, in highlighting the dangers —or rather, the unknown factors— involved in using digital media in terms of preservation (Riambau, 2013; 2014). And while a number of American production companies are storing their digital media in analogue format while there is no guarantee regarding the conservation of their digital material, Catalan small and medium-sized enterprises would find it difficult to turn their digital production over to 35 mm. Thus, the Filmoteca de Catalunya is charged strategically with monitoring the development of digital media preservation, and with acting as a benchmark and expert authority in what could be considered good practices to assess the Catalan film and audiovisual industry and contribute to conserving its contemporary production.

Secondly, the undertaking to provide access to and publicise the film and documentary collections and holdings kept in the Filmoteca de Catalunya, to enable their use and exploitation, with due respect for any intellectual property rights that may apply. In this regard, the GLAM (Galleries, Libraries, Archives and Museums), memorial institutions, have responded to the various calls by the European Commission to add content to build up an open trusted source of European heritage; facilitate knowledge transfer, innovation and the promotion of the cultural heritage sector; distribute heritage to users wherever they are and whenever they want it; and attract users with new forms of participation in their own cultural heritage (European Commission, 2010; 2011). There are numerous examples of the active role film libraries are playing in the dissemination of their heritage the world over: the Dutch website, Dutch Film History, is one such example; the union catalogue of French film libraries and archives, Ciné-Ressources, is another. The British Film Institute's search and access service is another fine example.

Thirdly, the opportunity to contribute to the training and employment of people who bring talent, creativity and expertise to the Catalan film and audiovisual industry. During the economic downturn it lost some muscle, but it is still solid, whether in the creation, production and marketing of traditional audiovisual content, for cinema or television, or in the use of such content on new media: video games, advertising, mobile apps, Internet, specialised design, photography, technology, and so on. Many small and medium-sized enterprises, along with future professionals currently in training, can find in the Filmoteca de Catalunya an ally in accessing content of heritage interest, as mentioned previously, but also in specialised research in the art of cinema and its techniques, completing the broad training offer in the subject in Catalonia, with unique specialised information.

Temària's articles of the same author(s)